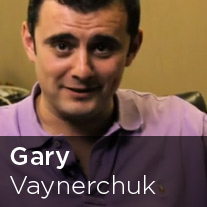 Gary Vaynerchuck is going to be on TSP as my guest.  For those that do not know Gary he is an amazing guy who built his business initially on wine with a Podcast called Wine Library TV.  He has gone on to become one of the most sought after speakers on building businesses and connecting with your customers.

If I had to sum up Gary in one word it would be passion!  I know some may wonder what Gary has to do with modern survivalism and self sufficiency.  In a word plenty as he is a master of creating personal brand and today that is one of the most valuable things any person can do for themselves whether to generate personal income or two remain marketable as an employee.  Remember at TSP we work on living a better life if times get tough or even if the don’t and owning your personal brand is a great way to make tough times a lot easier to deal with.

I spoke at length on these concepts in…

I also know a ton of you guys have blogs and websites for both part and full time ventures of your own.  Gary will appear on TSP and we will discuss building personal income and brand in a way that is meaningful to the person seeking self sufficiency in more ways that just “living off the land”.

How I Booked Gary

This wasn’t easy and I have been hunting this guy for over a year because I want you guys to hear from him.  Last night he tweeted,

And I  responded with

” I will buy 50 copies and give them to my listeners if you will come on my podcast and talk about independence via personal brand!”

He agreed to come on in the first week of March 2011 as part of his push for the new book.  He also hustled me to up my buy to a count of 60, I agreed to 70 with the condition that he promote his interview to his massive following (854,000 Twitter followers and 51,000 facebook fans and tons of blog subscribers) and he answered with “Deal”.

So not only will Gary be on TSP (long wait I know) but I will be giving the audience 69 copies of his new book “The Thank You Economy”, hey I am keeping one for myself.  I did this for three reasons

My Request for a Favor

Okay so a lot of you guys don’t use facebook and some find it a waste of time, I get that.  So if you don’t like facebook just stop reading and know that a great guest has been booked and I will be giving away his latest book to a big portion of the audience.  Fair?

However about 5500 of you guys do use facebook and I would like to ask you to thank Gary for me on his facebook page, since that fits beautifully with his new book and his personality.  I also want him to know that taking a risk by coming onto some show he has never heard of like “The Survival Podcast” isn’t really a risk and that he is going to be welcomed with very open arms here.  So if you could do the following I would greatly appreciate it.

Small I know, not much of a big deal but to a man like Gary it will mean a lot.  Again I am positive Gary had concerns about coming on to some “Survivalist Podcast thing”, but he did it after a lot of hustling by me.  Please take just a few moments today to let him know we appreciate him.

Those who have never head him speak before should start with this presentation (warning – Gary tends to curse, more than I ever do)  http://www.youtube.com/watch?v=EhqZ0RU95d4