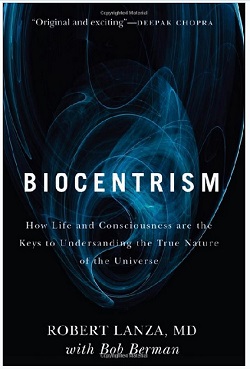 Today’s TSP Amazon Item of the day the book Biocentrism: How Life and Consciousness are the Keys to Understanding the True Nature of the Universe, by Robert Lanza and Bob Berman.  Okay that’s a mouthful, let’s just call it Biocentrism from this point forward.

So what is biocentrism, it is a new paradigm in the way we look at the universe, postulating, hold onto your hat, that observation of the universe by consciousness itself is what creates the universe as we know it.  For those that are of a religious persuasion, let me say in many ways this is actually a scientific argument for God, though the author does not approach it that way.

The authors are highly respected in their fields.  Robert Lanza is one of the most respected scientists in the world—a US News & World Report cover story called him a “genius” and a “renegade thinker,” even likening him to Einstein.  In this book Lanza has teamed with Bob Berman, the most widely read astronomer in the world, to produce Biocentrism, a revolutionary new view of the universe.

I am going to provide a video at the bottom where Lanza discussed this concept because it it too deep to provide in a short review here.  I am actually reading this book now with a great deal of skepticism for a reason that may seem counter intuitive.  Because it actually validates my very long held core beliefs.

You seen in 10th grade I was forced in government school to write a “term paper” in phyical science.  I decided to go rouge, use nothing but my instincts and wrote a paper I called, “Religious Misconceptions and Scientific Jokes”.  Note that I was a bible believing catholic at the time, this was not a shot a religion in and of itself.  Just the application of “God did it” as a full answer to how did the universe and life get here.  Additionally it was a shot at the “it just happened” explanation for the big bang and a perfectly balanced universe.

In this paper I postulated things like the non existence of space and time, that both were simply human constructs to explain that which we had no explanation for.  That there was no “big bang” of if there was it was not a beginning only a change of the relationship of matter and energy, which always existed.  It also got a bit metaphysical, but you get the gist.

I actually received an F on this paper, yea really.  Because I had no sources, no proof and just “made up a story in my head”.  Covered in Lanza’s book are 3 things I learned in following years about quantum physics.  They are…

Those alone have been very validating, and if you want to hear about them I will discuss them briefly in today’s closing segment.  The key is there are some things Lanza proposes that I still have issue with, and I refuse to accept them without critical analysis precisely because in my heart I want to believe them.

It is that which we want to believe that we must most critically question.  That said this book is challenging my own concepts to a higher level, and that is valuable to me.  Challenging your mind to new levels is what helps us to grow our intellects and thinking.

I will say if you enjoyed the fiction books by Richard Bach, namely Jonathan Livingston Seagull and Illusions this view is actually quite consistent with much of Bach’s imagined worlds.

In any event if you have ever questioned by main stream creationism and equally questioned the supposed scientific explanation of “its all an accident”, then you will want to consider reading Biocentrism: How Life and Consciousness are the Keys to Understanding the True Nature of the Universe, by Robert Lanza and Bob Berman.