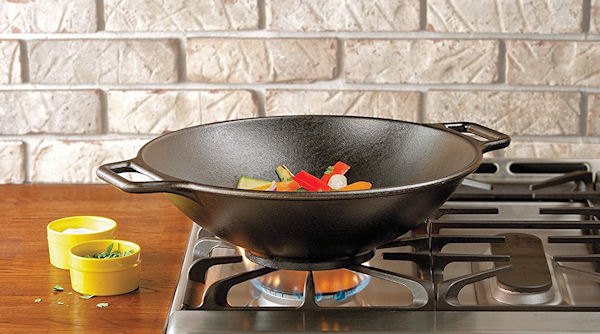 Today’s TSP Amazon Item of the day is the Lodge 14″ Pre Seasoned Cast Iron Wok.  I have been in the market for a new wok for a while.  Our current wok is a huge wok with one of those “stick free surfaces”.  It works okay but it is really too big (like 20 inches) and it just doesn’t really hold heat the way I would like, so it is going off to Goodwill.

In my quest for the new Spirko wok I examined two main options, the first was carbon steel and the second cast iron.  Basically I came down to the conclusion that the chief advantage to carbon steel is it is lighter and better for “tossing” stir fry.  Where as the heavy cast iron does better with great heat distribution.  However, given it comes in at 11 lbs, you are going to be “stirring” that stir fry, not tossing it.

The other advantage to the thinner carbon steel is it heats up faster, where the cast iron wok will hold the heat longer.  In the end I sat down in my kitchen and asked myself, which one is more likely to be still being used and in better shape then the day I bought it, long after I am dead.  On that thought I considered my grandmother’s old cast iron griddle that my father still has.  It was her mother’s and it was one of the few things though brought to the US from the Ukraine in the 1890s.

Well, that was that!  So I started looking at brands and I looked at thinner cast iron woks that weighed a bit less, but the reviews were abysmal and some were not actually cast iron.  Once again I thought about my own kitchen, all the cast iron I own is either old school stuff like Griswold found at flea markets and antique malls and almost all the new stuff comes from Lodge.

I have a Lodge Dutch Oven, a Lodge Griddle and quite a few other Lodge items.  So I checked out the Lodge Wok and realized it was always going to be my choice in the end.  No matter how many other ones I looked at there was one that you knew exactly what you were going to get when  you ordered it.

Lodge has been making cast iron for over 100 years right here in America, of the current manufactures they are simply the best at it.  Now I do dearly love old school “milled” cast iron, which is why I am always sniffing around antique malls, frankly it is about the only reason Dorothy can drag me into one.  But in 45 years of living I have yet to see and old school milled cast iron wok.

Buying the Lodge was a solid choice and with all the stir frying we are doing since discovering new vegetables like Thai Water Spinach which is growing far faster than we can eat it all, it was time for a new wok.  The Lodge is simply fantastic, this thing gets screaming hot, it stays that way.  I power the burner up heavy to get it pre heated but after that a low flame keeps it cooking hot and fast the way wok cooking is supposed to be.

Frankly if I had a larger kitchen I would like have this wok and a hand hammered Japanese made carbon steel wok as well, but my kitchen is rather small and any time I buy a new pan, frankly an old one has to go.  And funny enough cast iron seems to be taking over my kitchen.

So if you are in the market for a wok, and want something your great grandchildren can be using long after you are gone, check out the Lodge 14″ Pre Seasoned Cast Iron Wok today.  There are not many things left in our modern world that you can buy for under 50 dollars and yet know they will outlast you and your children, this is one of them.