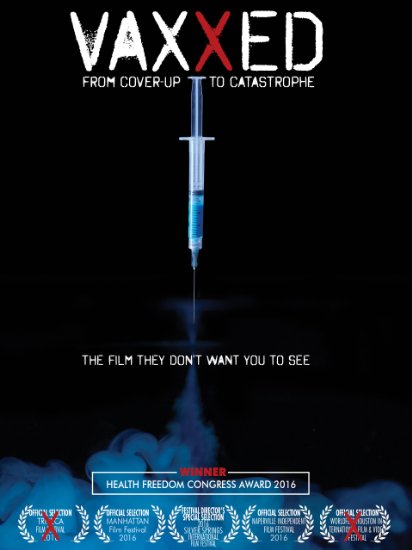 This Movie is NOT ABOUT what Critics Claim it is about.

Today’s TSP Amazon Item of the day is DVD of the Movie Vaxxed.  No doubt some will be angry and upset with me for posting this.  If so, first please read this, second if you are still mad, I have to say, something is wrong with your perception.

I don’t think any movie has ever been so criticized by people who have never seen it as this one is.  I read the hateful reviews on Amazon by people that claimed to have seen it, and their own words show that can’t be the case.  So I am simply going to say, why not watch the movie, research anything you disagree with and form your own opinion.

I mean I don’t like movies by some people and some I totally disagree with, say some made by that fat useless waste of skin Michael Moore.  Yet I don’t get angry that someone else watches it or recommend it.  People don’t go picket theaters that show these movies.  The entire media apparatus of the nation doesn’t engage in a coordinated slur, ridicule and LIE campaign about such movies.

No one states in America, that, “this movie should not be allowed to be shown”.  Do you really get how f’d up that is?

Of those that criticize this film I have noticed the two most common traits are.

Right now the DVD is available for pre order.  I suggest you get a copy and watch and judge for yourself with all the facts.  You will notice the movie is not anti vaccine, it is rather a call for more research and safety and testing of vaccines.  You say all that has been done, I say, watch the movie.

And don’t go using the whole “debunked” response, because every “dubunking” I have read or heard, ignores the facts of the movie and attacks Dr. Wakefield personally instead of addressing the actual facts presented in the movie.  Almost as if the debunker has not seen the very movie they are debunking and don’t even know what it is about.

Lastly that “discredited study”, was not even about vaccines.  It was examining a link between things like irritable bowel syndrome and autism.  It was a quite long and exhaustive study, multiple other researchers all signed off on it.  As in customary consensus has to be reached by all signing parties.

In this exhaustive study Wakefield included a a few paragraphs, almost an aside that, it appeared that there may be reason to look into a correlation between MMR vaccine and autism.  The study states that they are not claiming a link, it was just an observation.

Only later when Wakefield came out from his independent research and stated that parents may wish to get MMR in three separate shots until further research is done, did the witch hunt start.  In response the UK immediately stopped importing MMR in anything but a combined shot, denying parents the choice.  Next within a year the manufacturer discontinued manufacturing the individual vaccines, now denying all parents this choice.

Along with this, that original study was “discredited” meaning pencil pushers at the journal that published it, retracted it.  Wakefield was stripped of his license while every other person who signed off on it was not.  A narrative was developed that Wakefield falsified this study to show autism was caused by MMR, when the fing study wasn’t even about MMR and that study never claimed a link, just referenced a statistical anomaly noticed in the study which was about something totally different.

Instead of the truth now we hear, “he made the whole thing up for money” from people parroting the narrative, who never read the study and do not know what it is about.  In fact every attempt has been made to link anything and everything that isn’t 100% pro vaccine to this “discredited study”, which again wasn’t about MMR and vaccines.  And frankly concerns about vaccine injuries have been around for far longer than Dr. Wakefield has!

And you know what, even if everything I just wrote about Wakefield’s study was wrong, even if he had made it all up, even if it was about MMR and autism, it still would not matter as it pertains to this movie.  Because again, one more time,

The movie Vaxxed is NOT ABOUT ANDREW WAKEFIELD’S STUDY.  It is about fraud inside the CDC.  So why not get a copy, watch  it and determine you own conclusion?  What are you afraid you might learn?

Preorder Your Copy of Vaxxed Today

P.S.  –  Also note that I am not anti vaccine, I have major concerns about the number and frequency of them in young developing children.  I am far more pro vaccine than Dr. Wakefield, but I can’t disagree with what he and his team presented in this film.

Above all I believe a parent should decide what drugs do and do not go into their child’s body.  If you don’t think about dragging a child from his mother, holding him down and injecting him, THEN GO LOOK IN THE MIRROR.