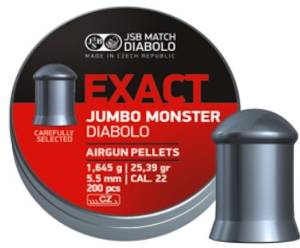 Today’s TSP Amazon Item of the day is JSB Diabolo Jumbo Monster Pellets which can be had in both 22 Caliber and 177 Caliber.  At about 15 bucks for 200 pellets they are not cheap by any measure but these are not “plinking pellets”.  Rather these are designed to turn your pellet gun into a sledge hammer.

It isn’t just energy we are talking here either it is also penetration.  If you open any ballistics manual and start looking at bullets, you will see a specification called “Sectional Density” usually abbreviated as S.D.

If you start looking at various bullets of a caliber you will see that as weight goes up, bullets get longer and S.D. goes higher.  So what is S.D.?  Simply a rating on an objects ability to penetrate.  And logically something longer and heavier is more “dart like” will penetrate better.  Imagine two nails, the same weight, one long and thin, the other short and stubby, which is easier to drive with a hammer?

So while the rest of the airgun world is trying to make lighter pellets for extreme velocity, JSG and a few others are going “Elmer Keith” on things.  Bigger, heavier, a little slower but more impact.  And it works.

I tested the 22 Caliber ones in my Benjamin 892.  Using a column of my covered porch as a vertical rest (not exactly a sand bag) they gave me a dime sized group.  Shooting at 40 yards they fully penetrated some old T-111 siding like it wasn’t even there.  Keep in mind this is from a classic variable pump 22 (about the only one left) with a modest maximum muzzle velocity of about 685 FPS.  I can only imagine what these will do in a top end break barrel or PCP gun!

The key is I don’t try to shoot pigs with a pellet gun.  I use mine for quite elimination of pests like rats, invasive pond turtles, raccoons, etc.   I also occasionally shot a squirrel if Charlie trees one and we share grilled squirrel that day.  Um, is there a better evening than grilled squirrel with your best friend and a beer?  For these uses these are the best I have found.  I did find a few heavier but none of those gave me really good groups, at least in my Benjamin 892.

I have not yet tested the 177 version but based on my experience I would expect they would serve the small bore airgunner very well for similar purposes.  Remember don’t go plinking with these, use them for hammering pests and small game.  You can get them here