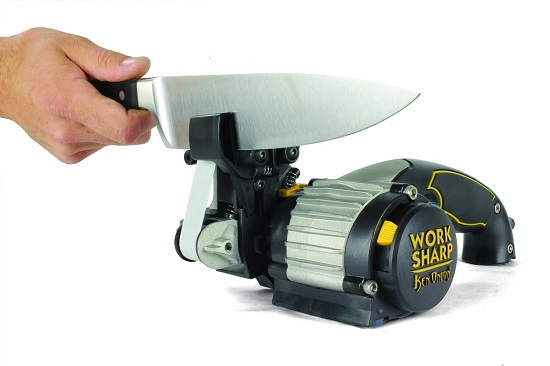 Today’s TSP Amazon Item of the day is Work Sharp Knife and Tool Sharpener Ken Onion Edition.  A few years ago I was asked my opinion of electric knife sharpeners on the air.  My opinion in short was NOT GOOD, having examined many, they all have one thing in common, well two, first they don’t really work, second they damage knives.  I also said if anyone finds a good one, let me know and I will evaluate it.

Then someone called in who had just bought Work Sharp he was quite satisfied with it and asked me to evaluate it.  The Work Sharp comes in two models

The chief difference between the two being that the Ken Onion edition handles knife angles from 15-30 degrees and is 100% integrated.  It also has some added features like a blade guide and I prefer the way the belts are removed.  So while the caller bought the base model I opted to buy the upgraded model.

When the unit arrived, considering Patrick Roherman’s comments on the Work Sharp that you can read here, I decided to start our with a “junk knife”, a discolored old plastic handled Mora in the back of the drawer seemed to suffice.  It did have a faint remainder of an edge but had been well abused.  I started with the coarsest (sharpening belt), chose a 20 degree angle and went to work, 5 minutes including two belt switches to finer grain belts and my knife was arm hair shaving sharp.

From there I touched up a few of my everyday kitchen knives using the fine belt, very quick a pass or two and nice and sharp.  Time for a real test I thought.  We have a small cheap Santoku Knife that was not just dull, the edge was gone.  My wife kept abusing it and I just never fixed it.  So I dropped down the the coarsest belt they give you, one for “sharpening tools and fixing knives”.  There was literally no edge at all, and lots of dings and nicks in the steel.  Figured a 18 degree angle would work, dialed it in, and went to work.

Total job took me about 15 minutes (going really slow to learn the tool) but in the end, once again I had a bare patch of skin on my forearm as proof the tool works and works well.

Again I invite you to read Patrick’s comments on this tool both pro and con.  I will point out one of his cons that the belts are “proprietary and expensive”, should be taken with a lump of salt.  Patrick is a pro who sharpens thousands upon thousands of knives, the belts are 10 bucks a set on prime and would sharpen a LOT of knives for the homesteader before needing replacement.  And I think Patrick’s final comment sums it up perfectly, “If I didn’t have the equipment I have I would probably consider purchasing one myself.”

I do want to point out that my fast results may be partly because I both do know how to manually sharpen and do have some machining experience.  You may want to pick up some true crappy junk to practice on.  One thing Patrick said about it is that the short belts can over heat faster.  I agree but you get the hang of it pretty fast and it is variable speed so that helps you learn slowly as well.

My advice is if you want sharp knives and don’t want to rely on a pro to sharpen them for you, get one of these and learn to use it.   I know a guy that sharpens knives at a Farmers Market for 5 bucks a knife for small knives and 10 for larger ones.  When you do the math it doesn’t take long for a tool like this to pay for itself.

And personally I see the extra money for the Ken Onion Edition (Ken is an award winning custom knife maker by the way), well worth the extra cost.  No extra parts to loose, easier belt changes, more flexibility, and sharpens more tools than the base model.  That said if you just want something for your kitchen and carry knives, the Basic One will likely make you happy too and not stretch your budget.

Again though, I do want to caution PLEASE if you get one, spend some time using cheapo practice knives with it before putting your expensive blades into it.   And I would go ahead and pick up a second set of belts right away too.  The cheapest practice knives I can recommend to practice with are something I think everyone should have a bunch of anyway, and you should not get these on Amazon, get them from a dirt cheap company called BudK.

The knife is a mora clone called the wahoo killer, these are used by every fishing guide I know in South Florida.  To these guys time is money so when one gets to dull to cut bait they toss it out and buy a new one.  At 3 bucks a piece they are a good value and frankly you won’t care if you screw one up.

P.S. – Since I ran this item the first time in 2016 over 200 members of this audience purchased one of these tools.  I have heard back from ONE and only ONE who had a problem, where a part broke.

They contacted Work Sharp who promptly apologized about the part, said just throw it away and immediately sent them a brand new one.  I am now absolutely sold on this product and more so the company that stands behind it.