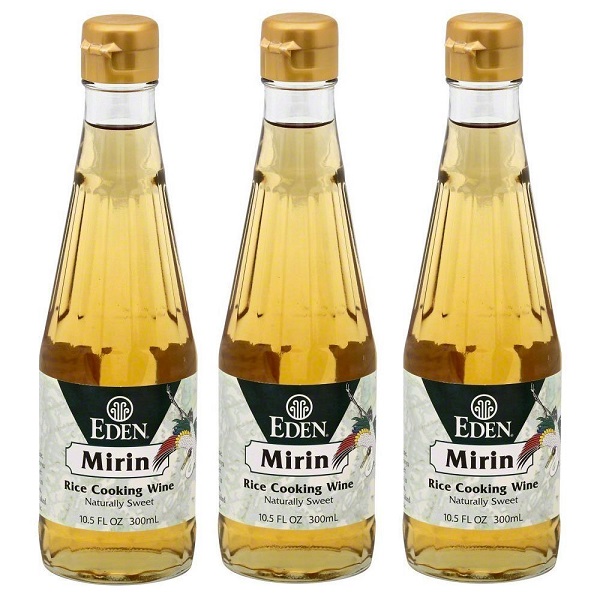 Today’s TSP Amazon Item of the day is Eden Foods Mirin.  So what is Mirin, well it is sweet rice wine generally used for cooking a variety of Asian style foods.  You will often hear even informed cooks say it is “sweetened sake”, and that is both true and false.  Let me explain.

Making an authentic Mirin is actually complicated and expensive to do.  You have to make a drinking quality sake (rice wine) that has a residual sweetness.  It doesn’t need to some super high end wine but it needs to be something you would drink.  The sweetness comes from rice sugar that fails to ferment because the yeast has reached its limit, not from what we term as “back sweetening” in the world of wine, cider and mead making.

As you may of guessed big food isn’t big on expensive and high quality.  Their way to profit is make stuff as cheap and fast as you can, then sell millions of units at low margins as cheap as possible.  In other words the Walmart model.   So when cooks and chefs say mirin is “sweetened sake” this is what they are talking about.  Manufacturers take the cheapest rock gut rice cooking wine they can get, add sugar (as either cane, corn syrup or if you are lucky rice syrup), stick it in a bottle and sell it for a couple bucks.  Bluntly do not buy this shit, it is shit, if you want to use this low level product in a recipe don’t even buy mirin.  Just buy cheap ass cooking sake and add about a teaspoon of sugar to a quarter cup and make your own.  At least then it will be real sugar instead of GMO based high fructose corn syrup.

Of course your marinades and cooking sauces will never reach their full potential that way.  You see real sake starts out by making something called koji.  This is a cultured fungus that is used to saccharify the rice.  To saccharify is to break down complex carbohydrates into more simple sugars.  In making all grain beer with do this to grain with a mashing process that involves heat.  When the Japanese make Sake they use a fungus to effectively accomplish the same thing with rice.  Koji is all the rage now being used in some many things including to break down meat in a pseudo dry aging process by foodies.  It works for this because it develops a sort of funky taste akin to dry aging only much faster while it also tenderizes meat.

In a good sake, the koji based process the rice goes though, leaves a toasted character in the final product.  Like almost as if the rice itself were slightly roasted though it never was.  Toasted isn’t even the right word, you have to actually taste it to understand what I am saying.  It is like telling someone frog legs taste like chicken.  They don’t but if you have never had frog the best thing I can compare it to is chicken until you try it.

So to make a good mirin we need a high gravity koji based must infused with a moderately alcohol tolerant yeast that will poop out about 9-11% alcohol by volume.  And the best will use natural yeasts produced along with the koji and the bacteria and yeast will work together to produce the final product.  Do that and you simply need to use enough rice to leave more sugar in the must then the natural yeast can process and you end up with, “Ajino-haha”.  Ajino-haha is considered the finest quality Mirin in Japan.  With that you get the residual sweetness, the koji toasted component and your food rocks.

Now I guarantee in the best Asian markets you have other options but if you want actual Ajino-haha and you want to buy it on Amazon you have pretty much one option, you guessed it, Eden Mirin.  I did a lot of research to find this stuff because even most food bloggers and TV chefs don’t know what I just explained to you.  The same TV chef who when using a white wine to make a French style meal will say, “if you won’t drink it don’t cook with it”, will turn around and use 1.49 a bottle high fructose infused garbage in a stir fry. (Bobby Flay I am talking about you and it is miRin not minin by the fricken way.  Yep if is pronounce like “mear in” not “min in”.)

So when I found Eden on Amazon I was happy but also skeptical about it.  The first thing I did when I got it was to pour about a half ounce into a glass and taste it, when I did I knew I found the real thing!  That toasted flavor is in there, the sweetness is evident of residual sugar but it isn’t sweet like candy.  It is bang the heck on and yea, you could drink this stuff as a wine.  As it isn’t for drinking the alcohol content is not on the label but I contacted Eden Foods and they confirmed the 10.5% I found on a foodie blog was accurate.

So if you love cooking Asian foods given Eden Mirin a try.  The two best options money wise are a three pack and a four pack.  You can get a single bottle but as it is a low priced item and only sold by 3rd party sellers you will pay shipping that way.  You may be able to find this stuff at your local market, but none of the grocery stores around me have it.  Unfortunately the good Asian Markets in the area are a hell of a drive though shitty traffic for me so I prefer to buy on Amazon, if this is you, Eden is your best bet.  Just save it for cooking, don’t go drinking it, though you could.

P.S. – Mirin is an essential ingredient in REAL teriyaki sauce.  For all the mystery it invokes real teriyaki is really easy to make only needing a few ingredients.  Here is how I make mine….

Most recipes say you just mix that together and you are done, it works but it isn’t perfect.  Now we want to thicken this sauce, many do this with some corn starch or arrow root.  DON’T!  Some recipes for stir fry do call for that (think Beef and Broccoli), use it when called for but not all time.

All we need to thicken this sauce is some heat.  So put it into a small thick bottom sauce pan and bring to simmer and reduce the total volume by about 20-25%.  An easy way to do this is put the sauce in a pot, sick the back of a wooden spoon in it and mark the liquid level with a rubber band.  When the level in the pot goes down about 1/5th to 1/4th depending on your preference, kill the heat, let cool and store in a jar in the fridge.

When doing a teriyaki stir fry use a small amount of this stuff to marinate meat or mushrooms (like a few teaspoons with the stuff chopped in a bag for a few hours to a day in the fridge).  Then finish your cook with as much as you want, so you don’t over cook the sugars in your wok.

The highest use though is teriyaki skewers of beef, chicken or pork.  Brush at the end with a good basting brush, cook until sticky and just a bit charred, sprinkle with sesame seeds and you will blow your family and guests away. Trust me this beats the shit out of even higher quality Asian restaurants (think P.F. Changs).

Variations on this sauce include, add 4 cloves of chopped garlic for a garlic teriyaki, or a crushed Thai chili or three for a spicy version, of course you can do both.  I do recommend trying the base version first though so you can get the most out of experimenting.  I also recommend straining out the garlic and or pepper so they don’t scorch when cooking.  One more variant, replace the dry sake with pineapple juice from a can of crushed or sliced pineapple. Try that on thin sliced pork skewers over a very high heat and thank me later.

P.S.S. – if you want to eliminate the tsp of sugar you can but it won’t quite be the same.  It really is a small amount based on how this sauce is used.