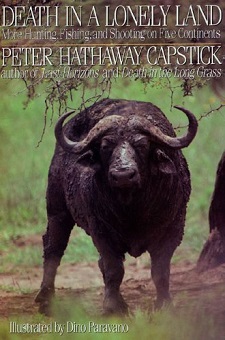 Today’s TSP Amazon Item of the day is the book Death in a Lonely Land, by Peter Hathaway Capstick.  Most of Capstick’s books are now in limited printing or simply being sold on what is left in stock.  So the hard covers are all over 20 dollars.  Some of the first editions I own are now worth over a hundred dollars.  But fortunately almost all of them are now on kindle and can be had at more affordable prices.

This one, Death in a Lonely Land is one of his best as it is a collection of shorter stories from Africa and across the globe.  Hair raising dangerous game stories of a time since passed.  Capstick’s work took up where famed writer Robert Ruark’s ended.

He was an amazing guy, with a really amazing life.  After a short career as a Wall Street stockbroker, Capstick headed to Latin America, where he traveled widely while hunting and fishing.

A few years later he returned to New York, where he founded a business arranging professionally guided hunting trips. Shortly thereafter, he took a position as hunting and fishing director of Winchester Adventures. In that capacity he made his first trip to Africa in 1968.  Subsequently, he worked as a professional hunter and game ranger in Zambia, Botswana, and Rhodesia.

He became a successful author in the 70s, wrote many books and was a featured writer for many magazines including Guns and Ammo and Sports Afield.  His books make you feel as though you are there, tracking the leopard or dodging the angry buffalo.

Sadly in 1996 at only 56 years of age he died of heart complications.  His work though lives on in his writing.  Also fans of this podcast owe Death in a Lonely Land a special little debt.  You see one of the last little stories in this book is about biltong.  Capstick describes his craving for the stuff while living in his semi retirement in Florida.

He discovers that he can simply hang red meat, dredged in apple cider vinegar and coated with salt, pepper and coriander in his home and in 7-14 days have wonderful biltong.  No stupid “biltong box” or dehydrator required.  In most instances just hang it, if it is abnormally humid just point a fan at it.   Sound familiar.

Yes Capstick didn’t just make me love hunting even more, he didn’t just let me travel to hunt Lions, Leopards and Jaguars with him, he also taught me about biltong, a debt I can never repay.  I will warn you though if you pick up Death in a Lonely Land you may find yourself like me, with every book the man wrote in your library or in your electronic collection.