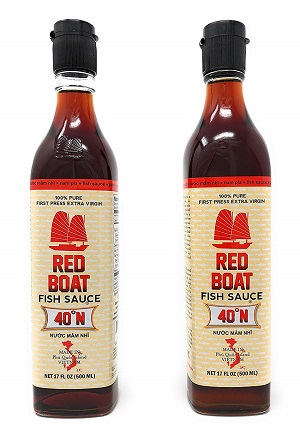 Today’s TSP Amazon Item of the day is Red Boat Premium Fish Sauce.  Anyone who knows even a bit about me knows that one of my passions is cooking and one of my favorite styles of food is Asian cuisine.  An essential ingredient to such food is called fish sauce.  Real fish sauce is made with only two ingredients, which are fish and salt.  As simple as that sounds making great fish sauce is not easy.

There are hundreds of brands of fish sauce out there but I personally consider Red Boat the absolute best you can get your hands on in the US.  The story behind this stuff is awesome, here it is from the official Red Boat website…

Red Boat was founded by former Apple Engineer Cuong Pham.  After moving to the United States, Cuong was hungry to recreate the tastes and smells of his childhood in Saigon. But not even the vibrant Asian markets of San Francisco offered the intensely fragrant first-press fish sauce, n??c m?m nhi, that Cuong remembered from Vietnam. So in 2006, Cuong decided that if he couldn’t find it, he would make it — and started Red Boat Fish Sauce.
.
Returning to Vietnam, Cuong expanded a small, family-run facility on the tropical island of Phú Qu?c. With its clear waters and traditional fishing communities, Phú Qu?c has long been renown for producing the world’s greatest fish sauces. Cuong partnered with expert fishermen and revived a centuries-old fermentation tradition. Today, the Red Boat brand is stronger than ever.
.
In an era where transparency, traceability, and sustainability reign supreme, Red Boat is just as committed to quality ingredients and its time-honored fermentation tradition as the day it was founded. That means no additives, no preservatives, and no flavor enhancers. Just the purest fish sauce on earth.

The keys here are first and foremost the traditional method.  The second though is first press only.  What that means is exactly what it sounds like.  After fermentation is finished the fish are pressed and the “sauce” is drawn off and filtered.  Key here is that Red Boat does a gentle press and only takes that first press.  Think of it like Extra Virgin Olive Oil, which works the same way.  First press is Extra Virgin, second is just Olive Oil.  What does Red Boat do with the “left overs”, I don’t have a clue but they only bottle the first press under their label.

I use this stuff in just about all my Asian style cooking and in some other ways as well.  For instance it is a key secret to my Bruschetta.  There are also a ton of recipes on the Red Boat Website you can dig into.   Suffice to say though, I won’t buy anything at this point but Red Boat.

Finally I am not linking to a specific product in this review but rather the official Amazon Red Boat Vendor Page.  There are two reasons for this.  First is that there are many sizes and options available from a single bottle to a half gallon to a three pack etc.  In the end it is all the same so buy the size that works best for you.  I should note as well that while the dot gov requires an expiration date for all food items, the entire point of fish sauce is it pretty much lasts forever.  Putting an expiration date on fish sauce is almost as bad as say putting one on a bottle of whiskey.

The second reason I am linking to the Red Boat vendor page though is they have some other things I just learned about that very much interest me.  This includes the Phamily Reserve 50N Hardwood Smoked which I have not tried but just ordered and expect to be amazing.  They also offer salt that is infused with the flavor or the black anchovies used to make the fish sauce.  May be that is what they do with the left overs?  That is just a guess but I am going to try the salt as well along with the Red Boat Pepper.  What all this stuff does in contribute what is known as “umami flavor” to your foods in a great way.  So if you love Asian food and umami like I do, give Red Boat a try, you will not be disappointed.