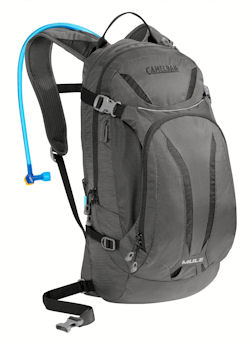 Today’s TSP Amazon Item of the day is the CamelBack M.U.L.E.  What exactly does M.U.L.E. stand for, well that would be “Medium to Ultra Long Endeavors”.  This is my go to pack and it has only gotten better over the years, I bought mine over 9 years ago, I am still using it, it is still in great condition.

In fact the video below is from a short hike we did in Arkansas over 8 years ago.  I mean this is SO LONG AGO, I Have an iPod in the electronics pouch vs. an iPhone!  I mean really I have been though 4 iPhones in those 9 years and I still have the same pack.

I will say this pack doesn’t have massive cargo capacity but is is plenty for EDC and basic trail emergency gear on short hikes.  It excels for mountain biking because it is not over sized.  My number one use is wearing it while working on the farm in our 100 plus degree heat, so I stay hydrated and do not pass out.

If you want a larger capacity for cargo check out the CamelBack H.A.W.G. – Which stands for “Holds A Lot of Water and Gear”.  It is basically an up-sized version of the M.U.L.E.  Unless I am taking a major hike or spending an over night or something like that I prefer the lighter and smaller format of the CamelBack M.U.L.E.

I personally feel that the CamelBack concept as a whole has saved many lives over the years and prevented likely 10 of thousands of cases of basic heat exhaustion and trips to the ER for heat stroke.  In my days in the military, especially in Panama and Honduras, the number one injury I witnessed was what is called a “heat casualty” and it always came down to insufficient hydration.

If you are in the market for a top quality hydration solution and want to be able to carry a nice amount of gear along with it, take a look at the CamelBack M.U.L.E. today.  It isn’t the cheapest item in the category but for a pack that has lasted 9 years and is still going strong, as often is the case you get what you pay for.   At 80-130 bucks (depending on the one you pick) with free shipping, this pack is worth every cent.  And hey that is less than I paid for mine, so many years ago.

When I first got this Dorothy liked the idea but thought is was “too expensive”, so she bought some cheapo hydration back pack, (the kind with no cargo space) from Academy for herself.  It failed, she bought another.  At that point I had, had enough and ordered her a M.U.L.E. and of course I paid extra to get it in red for her.  Where that second cheapo is I know not, likely in a land fill somewhere, but her red CamelBack is still in service.

Here is my video from 2009, this pack is slightly faded from the brutal southern sun but still going strong.