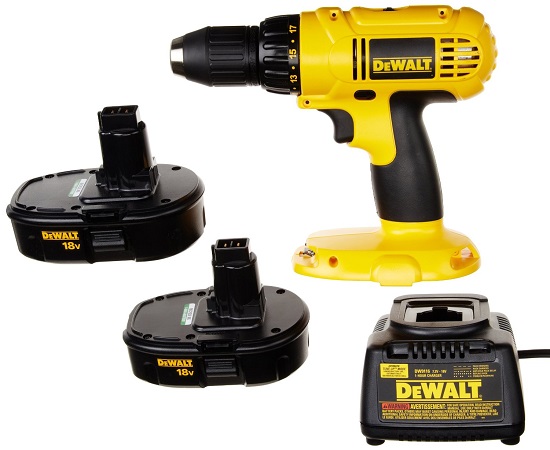 Today’s TSP Amazon Item of the day is the Dewalt Compact Drill/Driver Kit.  I have been a huge fan of Dewalt tools for over twenty years.  Here is why, in 1996 I was working in outside plant CATV, that means I ran a company that installed cable TV infrastructure both underground and aerial.

One day driving down a road I found an 18 volt Dewalt drill in the middle of the road, it had a 625 coring tool in it.  Don’t worry to much about what that means, but it did mean that a CATV worker was the owner.  I took it into the General Contractors office, told them to notify the crews that a drill was found, and only if the owner could ID the coring tool and a self made copper belt hanger to give it to them.

Three weeks went by and while two people said they lost a drill neither described the drill I found.  The General Contractor gave it back to me.  I used it until this summer with never a hint of failure.  Keep in mind this was used for who knows how long before I found it and likely took a spill off a truck doing 55 MPH.

Well this year my old drill finally died and you know how.  A well meaning person who I will not name used it and put it in a bucket, said bucket was left outside and we got 4 inches of rain!  By the time I found it the damage was done!  Had that not happened it may have gone another 20 years!

So I went out to find another drill and found the Dewalt Compact Drill/Driver Kit.  Dewalt has higher end drills and they also now have Lithium Batteries but this one looked like a good entry into Dewalt tools and as though it was all I needed in a drill.  Besides I have two NiCad chargers and many batteries already.  This was a great way to test this drill to see if I would recommend it.

Let me say, hell yea I recommend this drill.  It is every bit as powerful as my old drill, and it came with a charger and two batteries.  Total price with free shipping on Prime, 99 bucks.  The reason I got this drill is I own almost every other Dewalt power tool you can buy, and about 6 batteries and two chargers.

If you have chargers and batteries you can actually buy this drill as a bare tool for only 40 dollars on Prime!  But to me 60 for two more batteries and another charger was really worth it, so I bought the kit to expand my battery depth.  I will also say if you have 18 volt Dewalt tools already, 40 bucks for an extra drill, man what a steal.

For a new tool buyer though what this kit does is let you get into Dewalt tools at a very low price point.  You can down the road add say a circular saw, reciprocating saw or impact driver.  If you decide you want Lithium batteries, you can just buy them along with a charger and rock on.  If you want higher amp hour NiCads than come with this kit, the included charger will charge them just fine.

There is the one downside of this kit, the charger will not charge Lithium batteries, it just won’t.  In the end I have simply decided that the cost at this point of Lithium batteries for Dewalt exceeds the value they bring to the table.

If I was back in the contracting business using my tools all day, everyday, I might feel differently.  But for homestead tools, the old school Dewalts do two things I look for.

So I see this as the sweet spot entry point into Dewalt Tools, and I see a cordless drill as likely the most useful single power tool you can own.  Like I said down the road you can add other tools or upgrade to Lithium if you feel you need it.  I have thought about it many times and I just sit there looking at a 100 dollar battery and ask myself this, in the last 20 years, with keeping two chargers and at least 4 batteries around, have you ever needed a tool, and not had a hot battery.  My answer is always no.

And in the end there it is!  No, my tools are always there when I need them, as long as I can find them anyway, but that is another story.  On another note if you need NiCad Dewalt batteries, get these. They are higher amp hour batteries than the ones in the kit, but will fit all Dewalt 18 volt tools and work with the kits charger just fine.

Do not buy any of the after market stuff, the price is tempting but they are all in my experience junk.  And when you figure that out and want to return them, Amazon won’t let you because they say they are “too dangerous for you to ship back”.  Seriously!

And one more thing before I sign off today, I am not a Dewalt snob, I know some are and think any other power tool is just crap.  There are some other great tool makers out there.  I also really like Bosh, Makita and Milwaukee as great value for the money tools.

I have settled on Dewalt, simply because every tool, I have ever owned by them just worked and has done so flawlessly for a long time.  And if you happen to want a more heavy duty drill from Dewalt, I would recommend the Dewalt DCD950KX.   Or opt for the same drill as the Dewalt Bare-Tool DCD950B if you already have batteries and chargers and don’t want or need more.

And there in lies the beauty, you can start out with Dewalt tools for under 100 dollars, and add batteries, chargers and bare tools as you feel you need them over time.  On this drill though the bottom line is, I would have to go back to coring cables and drilling telephone poles before I think I’d find something my new Dewalt Compact Drill won’t do well.  I mean there is a reason it has 3200 plus reviews on Amazon and 93% are 4-5 stars.