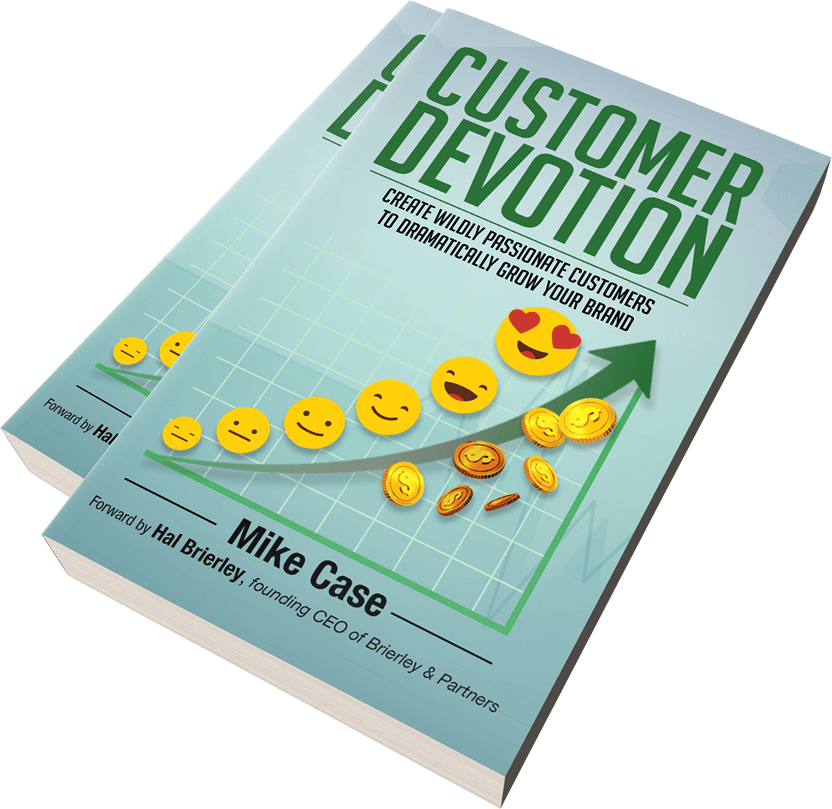 Today’s TSP Amazon Item of the day is a newly released book by Mike Case called Customer Devotion: Create wildly passionate customers to dramatically grow your brand.  So exactly who is this guy, Mike Case?  Well as you guys know my background is in sales and marketing and I am one of those people who never went to college.  When asked what college I went to, I generally say the “School of Hard Knocks”.  Despite not having a degree I worked in some of the largest companies in the world, at one time running the most successful region for a 500 million dollar company.  Along the way I found mentors that helped me grow and develop my knowledge and skills.

Mike became my boss and mentor in 2006 and we only worked together about 7 months.  If my life has been a journey though the school of hard knocks, Mike acted as my mentor as I completed my PhD.  When I first met him they were interviewing people to run their Internet Marketing department at Sage Telecom.  They considered something over 70 candidates for the job.  I walked in and laid out a plan, from end to end on how to build their online presence.  I was hired and even got some major concessions about working form home.

Initially the job was something I felt would be a nice last job honestly, I was ready to do something on my own.  I quickly delivered what I promised and was largely left to my own at the company.  Mike though took a particular interest in working with me.  Not really like a typical boss, more like, let’s talk about marketing, the big picture, etc.  We actually did a lot of this discussion after hours.

The reason my time with Sage was so short is the owners decided to sell the company.  Mike took me into his confidence and told me this as soon as the process started.  The company was sold at a significant premium thanks to the work our team led by Mike had done. During his time Mike built a customer loyalty program at Sage Telecom unlike anything I had ever seen.

Folks consider that Sage was a local phone service provider primarily serving rural areas of the nation.  From 2002-2007 when we both left, Sage was the only such company growing its market in the country.  Selling local land line service in 2006, was akin to selling black and white television sets in 1990.  Yet his program didn’t just work it thrived.  Yet the new owners were just not the people we wanted to work for.  So both of us went on to other things, but have remained in touch for the past 12 years.

What did my time with Mike and his mentorship yield me?  I went strait from Sage to my partnership with award winning entrepreneur Niel Franklin (to this day the only two time winner of the Branson Award, yes as in Richard Branson).  We founded Franklin Spirko Media and quickly became successful and within a month of being formed I was able to acquire the Trump Organization as a client.  I continued that work until mid 2008 when I founded TSP and continued in both enterprises until 2010 when I dissolved my official partnership with Neil and the rest is well known to the TSP audience.

Mike has worked for some of the biggest companies in the world and his book Customer Devotion is written from that perspective, but I can tell you Mike’s stamp from his mentorship is a significant part of The Members Support Brigade program.  Translation, what Mike teaches in this book can help you grow your business, regardless if you run a multi million dollar corporation of a small company, it simply doesn’t matter.

Mike is an amazing guy and very well known in the marketing world but he is also a new author so to get his book off the ground he is running an awesome intro price for the first week to move some books and get on the map.  The book will retail at 19.95, but you can get it this week in hard copy for only $5.29.  If you are a prime member you can get the Kindle Edition for free, if not the Kindle Edition during this week is only 99 cents.  I really recommend adding this book to your library and I would consider it a personal favor of anyone in this audience who would leave an honest review of it on Amazon.

Mike is a guy I have only mentioned a few times on air, but he is a mentor that helped me develop a lot of what I have taught you guys about business and marketing over the years.  This book is already set to be required reading for an MBA Program at the SMU Cox School of business, it is that good.  So consider picking up a copy of Customer Devotion: Create wildly passionate customers to dramatically grow your brand by Mike Case today.  If you want to see what some of the brightest minds in the world of marketing have to say about it, see the PS below.

P.S. – The caliber of the folks recommending this book is pretty amazing here is what they have to say about it.

“Customer Devotion is a powerful ‘must read’ for marketers seeking to better understand and further motivate their most valued customers and ‘like prospects.’  In this compendium of loyalty expertise, Mike shares many strategic guidelines as well as detailed tactics for developing CRM approaches and re-tooling loyalty initiatives across a broad range of industries, including startups and well-established companies.  I highly recommend this practical guidebook to marketers focused on creating and benefiting from true customer devotion.”  ~  Rita Bargerhuff Egeland,  frm. Chief Marketing Officer, 7-Eleven Inc. and Rent-A-Center Inc.

“Loyal customers are the key to successful brands.  Mike Case leverages decades of experience working with a diverse set of start-up, mid-sized and Fortune 500 companies to lay out a road-map for the journey of inspiring customers to become, and remain, passionately loyal to consumer brands.  Driving brand growth with customer devotion is something every marketer should care about passionately and strive to achieve.”  ~  Scott Emerson, Founder and President – The Emerson Group

“Having worked with him and watched his career from afar, Mike Case fundamentally ‘gets’ both the head and heart of marketing a brand.  He leverages decades of experience grounded in data to masterfully illuminate the path for motivating consumers to become true brand advocates.” ~  Frank Hamlin, Chief Marketing and Omnichannel Officer, GameStop Corp; fmr. EVP Marketing and e-Commerce, Guitar Center Inc.

“Those who fail to learn from history are doomed to repeat it.  Mike does an exceptional job of unpacking the history of loyalty marketing and customer delight in a way that spotlights the valuable lessons you need to succeed.  Customer Devotion gives you clear insight so that you can avoid making the mistakes of the many who have come before you.” ~  Angelo Lombardi,  fmr. Executive Vice President and Chief Operations Officer, La Quinta Inn & Suites

“For those seeking to fully comprehend the many diverse elements of building lasting customer loyalty, Customer Devotion is your answer. Mike Case shares his rare combination of experience in implementing these elements within many industries from the view of both an internal executive and an external consultant.”  ~  Bernie Feiwus, fmr. Chief Executive Officer Neiman Marcus Direct

“As a lifelong marketer I’ve learned that creating customer loyalty is hard enough, but creating true customer passion is even harder.  Customer Devotion provides easy to follow approaches to turn your data into powerful insights to drive deep, meaningful customer relationships.  If increasing revenue to grow your brand keeps you up at night, Customer Devotion should be on your nightstand.” ~  Paul Frantz, Founding Partner, Ascend Partners;  frm. CMO Energy Plus