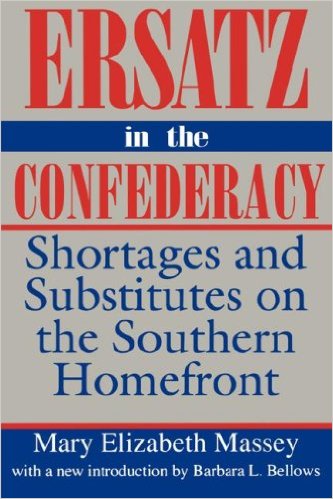 Today’s TSP Amazon Item of the day is Ersatz in the Confederacy: Shortages and Substitutes on the Southern Home Front by Mary Elizabeth Massey.  If you really want to understand what a crisis is, this book will make it very clear to you.

So what is an ersatz, it is an item made or used as a substitute, typically an inferior one, for something else.  In other words when you don’t have coffee you use roasted chicory root for instance.  But if you read this book you will see it was much deeper and traumatic than that for those that lived though this time.

We toss around the term, “shit hit the fan” a lot in the prepper space.  Consider though that from the day this nation was founded until today, there has never been a time in America where the shit hit the fan as hard as it did for the south in the war between the states.   Great depression you say?  Hold on and read this book.

The northern strategy to win the war quickly went from a full on military over run (which didn’t work) to a strangle hold approach.  The north had a naval advantage and control of rail and greater ability to communicate with things like the new telegraph system.

Even in the parts of the south were a musket ball never flew in anger, suffering was great.  As one reviewer of this book put it,

“During the WW2, men and women on the home-front were encouraged to “Use it up,wear it out, make do, or do without.” After reading this book, however, the men and women of the Southern home-front did that and more.
.
From 1941 to 1945, butchers may have been asked for a free soup bone for the dog, but as the Civil war dragged on, it wasn’t unusual for a Confederate butcher to hang dressed rat in the window…when one was available.”

Talk about hard times!  And this book doesn’t just tell you what they went through, it tells you what they did to get through it.  If you are worried about stability and long term security of our society.  And if you feel that true hardship may again fall our people, this book is required reading.

Additionally if you just have an interest in real history beyond dates and facts you should read this book.  It tells the real story of the suffering of civilians in time of war.  Our nation has largely been insulated from the direct effect of war since the end of The Civil War in 1865.  Hence the American people have a highly disconcerting tolerance for war.  Perhaps a reminder of what it is like for those not carrying powder and shot may alleviate that a bit?

Additionally as preppers we should be keen on knowing how people actually survived a true multi year crisis that included a hot war zone in their back yard, advancing and resource taking enemy troops and shortages of anything and everything necessary for survival and comfort.  If this sounds like something you would like to know more about check out Ersatz in the Confederacy: Shortages and Substitutes on the Southern Home Front today.

P.S. – This book was first published in the 50s and reintroduced in the early 90s.  I guess that is why no kindle version exists.  I have linked to the soft cover, but if you prefer a hard cover version, they have that option as well.