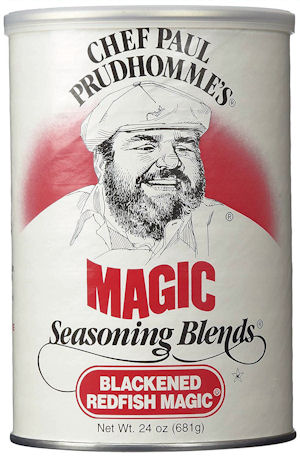 I had forgotten all about him, but last a few years ago on a fishing trip with my guide buddy Omar Cotter and two good friends we really got into the striped bass, as the photo at the end shows.  I was talking to Patrick and Thad about how to make the striped bass fillets and Omar popped up with use Chef Paul’s Blackened Redfish Magic Seasoning.  Now I have like 50 great ways to do fish but when a man that catches fish for a living says to try something, I have learned friken try it.

P.S. -Since first reviewing this it has become one of my go to seasonings for all meat and fish.  It is amazing on steaks on my Blackstone Griddle, awesome on pork, etc.  You really have to give this stuff a try.  I did oysters on the half shell in Florida last year.  Shuck, put on top of a hot charcoal grill with a bit of butter, a slice of jalapeno and a sprinkle of this in each shell.  Cook over high heat till the butter melts and the oyster releases its liquor.  Aaaaaaamazzzzzzzing!

P.S.S. – Thanks to an Amazon reviewer I do have the base recipe for Chef Paul’s red fish seasoning.  He apparently published it in a book from 1984.  I think it must be Chef Paul Prudhomme’s Louisiana Kitchen because it is the only book by Chef Paul from that year.

Paul was an amazing guy an well ahead of his time.  He was teaching young deer hunting red necks like myself how to cook in the days of rabbit ear television and PBS.  Long before all these non reality TV shows with competitions and fake drama built into them.  Anyway here is that recipe if you want to try rolling your own, thanks to Amazon reviewer  Kabol, Johnathan N. for posting it.

Tasting the current mix I think this is a good base to work from and work up your own version, though I am about 100% sure changes have been made since 84.  I may give it a try but honestly it will be hard to beat the pre packaged mix and I don’t think you can do it for less money.  Again 24 ounces is a LOT of this stuff, I don’t think you can make it for yourself and save a thin dime doing so.