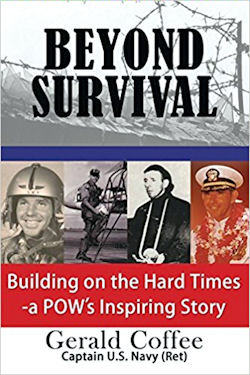 Today’s TSP Amazon Item of the day is the book, Beyond Survival: Building on the Hard Times – a POW’s Inspiring Story by Gerald Coffee.  The history segment yesterday reminded me of this book and I was happy to see it has been re-released and is still available today.

I read this book in 1992 while deployed to a remote area of Honduras as a US Army Solider.  I was attached to the 536th Combat Engineers.  We lived in tents, we crapped in out houses with 55 gallon drums under them and we urinated in pipes drove into the ground taking care that the attracted bees didn’t sting your nether regions.    To be blunt the place was a pit and we were there for a 190 days.

Like all soldiers we did a fair amount of bitching about our situation, bitched about our beer ration, bitched about MREs for lunch every day, etc.  One day my commander, an amazing Captain who was a West Point Graduate said to me, “hey Spirko, read this book, I think it will make a big impact on  you”.  He tossed a book that clearly had been heavily read and said, “I think that book has been passed around to dozens of soldiers by now, when you are done find the right person to send it to next”.

Before I continue let me say the Captain who gave me this book, was the finest officer I ever served under.  He was an amazing man I would have followed into combat without a second thought.  He was that good.   So this wasn’t an order, I knew he would never bother me about it again, but we both knew I would read the book.

That night I sat down on my cot with my 2 beer ration from the PX trailer and started reading.  I think I got a 1/3rd though it that night reading by flashlight while my 7 tent mates slept.  The next day was a Sunday and it was our one day a week off.  I settled under a huge rubber tree with my MRE lunch, which all of the sudden seemed quite appetizing and read further.  By chow time for dinner I was finished with the book.  That night as I watched a steaming pile of Chili Mac (generally dreaded by soldiers) ladled onto my plate I was grateful beyond words.

In this book, Captain Coffee recounts his years as a POW in North Vietnam.  Beginning with being shot down, handed over the the Vietcong and all that occurred after that.  How POWs used tapping on walls to communicate, the rancid food they lived on, how they were tortured and forced to sign confessions as war criminals and more.

The book continues up to the point of eventual release and what coming home after such things was like.  I read the book two more times before passing it off to a good friend.  I know it went to three more men before the last guy to get it took it with him to his next duty station.

If you are military (current or prior service) you will love this book but anyone will be deeply moved by it.  I also think it would be great for our children to read once old enough, personally I would say about 14 is the right age but parents should read it first and make their own decisions about that.

So check out Beyond Survival: Building on the Hard Times – a POW’s Inspiring Story by Gerald Coffee.  It will inspire you and make you grateful for many things you take for granted every day.  I personally feel that is something we all need from time to time.