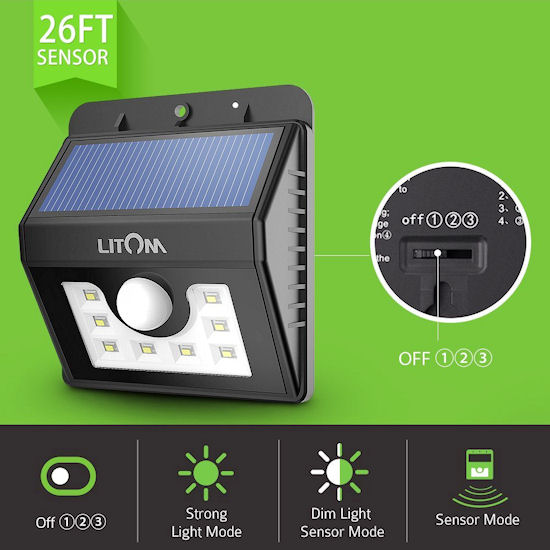 Today’s TSP Amazon Item of the day is Litom 8 LED Solar Wireless Security Lights.   I previously reviewed the 20 LED version and promised a follow up of its little brother.  Well here it is, these are excellent and very much a half sized version of the larger light, with one big difference.

Fully charged I got 8 hours out of them in steady on high mode.  They got though the night fully on low power mode and frankly I use them on motion sensor mode only, and that is the main thing I want out of them anyway and it makes the most sense to me.

As previously mentioned I ordered 4 of them and put them around my duck pen on the fence on the western side where we had most issues with predators approaching.  The entire east side is covered by the 20 LED version for our benefit during evening and night visits.

I have now had them working for about two weeks and no issues.  They will definitely deter predators as none like light suddenly on them.  They also paid off a few days ago when my young farm hand screwed up one of his tasks (yet again) and grounded out our electric fence wires.  The lights made the fault easy to find and even easier to correct.

Since the first time I reviewed these lights I have installed 4 more of them around my garden pond, I have them set to full power mode and always on once darkness comes.  They do a fantastic job of setting a great mood at the pond and attract bugs for the fish to eat.  I have been outside as late as 4am and noticed they were still on.  So far with 12 deployed only one has had its battery go bad, which is impressive for no name batteries.

The other difference is the price, as they are smaller they cost less.  Where as the 20 LED ones are 34.99 for a two pack the smaller 8 LED model is 46.99 for a four pack, just a bit over half the price.  They are also available in units of one if you only need one or two.

They both work exactly the same with three modes…

So which is right for your needs.  Well the little ones are damn bright but the light only carries so far.  They are best for areas where you just need to see what is going on, or for use as security and predator protection devices.

The 20 LED models are as you would expect twice as bright, so I have one at our front gate to the property, and one at the front of the house.  And two by the pool to light that area and the area at the main gate to the duck pen.  The 8 LEDs would be fine in the second area but for our gate and where we unload our vehicles I would stick to the 20s.

Litom also makes a huge 54 LED Model that I am sure is very bright and based on their other products I am sure it works well, it just seems a bit of an eyesore in the day time to me?  But if you need a lot of light check it out.

Otherwise if you just want to light up some areas with motion lights and want maximum bang for your buck with out sacrificing quality check out the Litom 8 LED Solar Wireless Security Lights today.