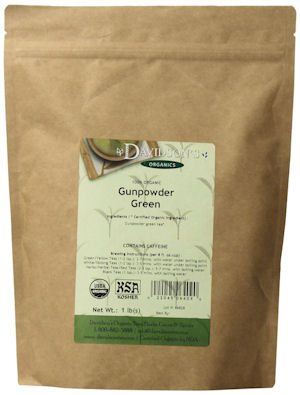 Today’s TSP Amazon Item of the day is Davidson’s Gunpowder Green Tea.  As most of you know I drink a lot of herbal teas, so you may be wondering why I am featuring this item.

While I do occasionally make this tea stand alone as either hot or iced, I mainly use it to blend with my herbals.  I do this for two reasons.  One is that it adds great flavor and depth to many herbal teas.  The other is for a kick of caffeine into an otherwise caffeine free tea.

So what is up with the whole gunpowder thing?  Don’t worry there is nothing from Hodgdon in there and it doesn’t smell of cordite.  It is simply the shape and form of the teas.

Gunpowder tea is a form of Chinese tea in which each leaf has been rolled into a small round pellet. Its English name comes from its resemblance to grains of gunpowder. This rolling method of shaping tea is most often applied either to dried green tea (the most commonly encountered variety outside China) or oolong tea.

Gunpowder tea production dates back to the Tang Dynasty 618–907. It was first introduced to Taiwan in the 19th century. Gunpowder tea leaves are withered, steamed, rolled, and then dried.  Rolling renders the leaves less susceptible to physical damage and breakage and allows them to retain more of their flavor and aroma.

The truth though is you can use it with just about any tea you fancy, also you don’t have to be held to my parts of each ingredients.  I recommend people make up very small amounts using say a teaspoon for your “parts” to find what works best for you.  One of my favorite ways to use this is a simple take on Earl Grey, no I am not kidding, here is what to do.

First you will need Bee Balm for this but it is likely growing in many herb gardens and property margins already.   If not plant some just plant it where you don’t mind it running it is a member of the mint family.  It is a hardy perennial that runs and spreads.  All it needs is moderate sun and moist soil and it will grow like a weed.  Now this stuff is also referred to as “wild bergamot”.  Bergamot is actually an orange grown in Southern Italy.  As oranges go this one isn’t much for juicing or eating but the oil is something special.  If you have ever had Earl Grey Tea you know that it has sort of a velvet finish.  That is from being infused with the oil from this orange.

Okay so they call Bee Balm wild bergamot because its oils produce that same texture when made into a tea.  It is not the same oil but it has the same mouth feel and similar flavor.  So blend 2 parts green tea to 1 part bee balm (by weight) and you get Green Earl Grey Tea, well sort of.

Of course for loose teas you either want a good infuser or french press.  Either way I think you will be quite pleased if you give Davidson’s Gunpowder Green Tea a try.

Remember you can always find all of our reviews at  TspAz.com

P.S. – For some reason Amazon has lumped ALL Davidson’s tea reviews together, this renders the reviews on this item essentially useless.