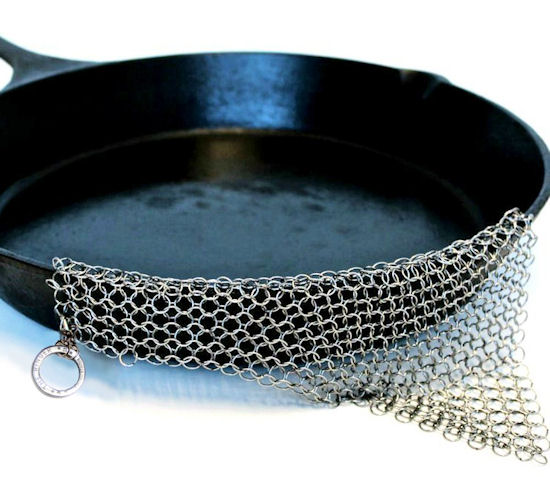 Today’s TSP Amazon Item of the day is The Ringer Cast Iron Scrubber.  As a long time user of cast iron I was pretty interested when I first heard about this little gadget.  I picked one up figuring I would try it out and likely it would be like many gadgets, sure it sort of works but big honking deal and it would end up in the junk drawer.

Um, WRONG!  This thing is awesome, and it is one I am frankly late to the party on.  I have had a lot of folks over the house and if I used cast iron to cook for them, I always show them the ringer, most are like, yep got one of those.  Why?  Because it fricken works and it makes your cast iron better over time.

Here is what I do, I generally heat up my pan with what ever crud is in it to medium hot, I then dump in a cup of water or two, it deglazes the crud.  I take the hot pan over to the sink and dump out the water, add a bit more and give it a scrubbing with the ringer.  This with a well seasoned pan is all you really need, just heat dry and oil and you are good.

What I do a lot of times though, especially if there is a small amount of crud left is put in a big pinch of kosher salt, it acts like scouring powder and give it a bit more scrubbing with the ringer.  This not only cleans it perfectly but it is doing micro sanding of the iron and patina at the same time.

I have a lot of old school milled cast iron, but one thing I have never found is a dutch over like that, well one I didn’t need to sell a kidney to buy anyway.  So I have a modern Lodge Dutch Oven, and with this technique even it is almost as good as old school cast iron.

So if you cook with cast, either old or new, consider getting The Ringer Cast Iron Scrubber into your kitchen today.  At only 15 bucks it is a great deal, I have had mine about 2 years now and it is still as good as new.