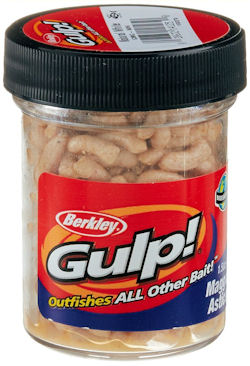 Today’s TSP Amazon Item of the day is Berkley Gulp Soft Bait, the specific one linked looks like little maggots but you should explore other options as well and find what suits you best.  My fist experience with baits like this was when I was 4 years old, so I barely remember it.  My dad and grandfather took me to a kids “Trout Rodeo” and the old man pulled out something he called garlic bait.

I ended up winning the prize for both the 4 largest fish and the largest individual fish.  I would have also gotten “First Four Fish” but they gave it to another kid because it “wasn’t fair” for one kid to win all three!  Seems participation trophy thinking isn’t that new after all.

The bait was a putty like thing and worked fine on trout but didn’t work so well in the south for pan fish.  Then about 10 years ago I was fishing with a friend named Brad as a small lake he had found.  We were tossing baits up under the remains of a old dock and nailing big and I mean really big bluegills.  I was using small pieces of worm, and he was out fishing me 2 to 1.  Folks Brad just isn’t that good!

He tossed me a jar of little pink looking worms and said try it.  I did and soon was keeping up with him.  I looked at this jar and realized it was my grandfathers technology evolved for the 21st century.  Now here is what I really love about this stuff, sure it works but frankly I have done well on pan fish with bread balls, minnows, crickets, worms, meal worms, etc.  Some days this may do better, others not as much, fish are just finicky some days.  But this stuff will always work good enough.

And you know what it does that none of the others do?  You can make up a small fishing kit, put this in it and throw it behind your truck seat and 6 months later, it will still be good and it will still work.  You got it, this is THE BAIT for your “survival fishing kit”.  Trying not to be overly dramatic I call mine my “mini fishing kit”.

Here is the deal the easiest fish to catch are ALMOST always pan fish in small back waters, etc.  That or small wild trout and this works for both.    In a back woods situation or a let’s say it a “survival situation” you need food, so you take the easy options first.  But once you are catching pan fish, you can use them or cut parts of them to catch bigger fish if they are around.  In fact if you watch the video playlist below you will see me do just that.

In that series I took a small kit, way less than I usually carry and used flowers as bait, I then caught some small perch, I didn’t want to kill them just to prove a point so I then released them and used hot dog to simulate using them as cut bait, I was then able to catch catfish and a snapping turtle.  All this in about an hour in a small muddy creek.  Imagine if I had simply had Berkley Gulp instead.

I keep this stuff in my small kits and in my tackle bags and I never am in a situation where I don’t have any bait.  That alone makes me love this stuff.  Again their are quite a few varieties, I personally never did well with the “night crawlers” but know some that have.  The crickets seem to have good reviews but I have not tried them.  So far I have gotten the best bang for the buck out of the little maggots.  Man they sure beat forgetting a box of worms in your truck!

P.S. – The videos below are a four part series called “Survival Fishing with Flowers”.  While I didn’t use this product in the series, had I done so it would have been easier.  I am including it mainly to make the point, if you can catch little fish, you can work up the food chain to larger sources of food.