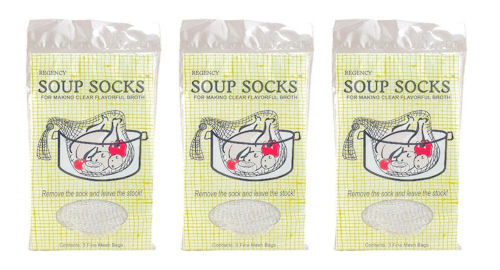 Today’s TSP Amazon Item of the day is the Regency Soup Sock.  When I showed this to my son, his exact words were, “that thing is genius”.  Now my son didn’t quite learn everything I know about the kitchen but he seems to have paid attention to stuff that lets you stretch a dollar!  He is now 27 with two kids of his own, so that makes sense.

So one thing we have always done in the Spirko house hold is make at least two meals from a chicken, some times we freeze the left over parts and do two or three frames into soup at one time.  More often than not though, it goes like this.  Make whole roaster chicken, have dinner, next day toss remains into a pot, boil and make a pot of chicken soup for dinner the next day.

This process is really easy and I will give my basic method in the PS below, but there is one issue.  When you simmer that birds frame long enough to make a good stock it sort of falls apart.  This leaves you to strain out tons of tiny bones and gristle and skin from everything else.

Enter the soup sock, put bird in sock, simmer till meat falls off the bones, remove sock, set aside, add veggies, let bird cool, pick off meat and add back to pot.  It saves a lot of time and one sock is plenty big enough for one bird, even if it isn’t a left over.  I have used these for duck stock as well, and making quail stock.  Real time saver there.

When I process quail I cut out the back bone with kitchen shears.  Sometimes we process 40 quail, one time we did 80, that is a lot of back bones!  Man those things when they come apart are tiny but they have tons of flavor so why toss them.  We put them in bags until we want to make up some quail stock or simply add them to chicken stock.  Into the sock they go, you just pull those things out and discard, the tiny amount of meat on them isn’t worth the effort.

One thing I really believe in is developing skills that make your life more cost effective.  When you an take a roaster chicken and feed four people twice with it, all of the sudden you can afford organic, pastured, etc, what ever the best you can get is in your area anyway.  So consider adding the Regency Soup Sock to your pantry today.

Note that the link I provided goes to a 9 pack of them, (three packs of three), at 9.37 with free shipping it makes them about a dollar a piece and the most cost effective way to buy them I have found so far.

First – cut bottom off celery, carrot tops off (if you have them) and cut onion into quarters.  Cut lemon into quarters Put chicken in sock, add to pot cover with water.  Also cut the leafy tops off the parsley, tie the stems in a bundle.  Toss in celery bottom, carrot tops, quarter and toss in entire lemon, toss in parsley stems.  Add half the garlic, add bay leaves, about a table spoon of salt and a table spoon of black pepper bring to simmer.  When simmer starts dissolve about two teaspoons of Better Than Bullion Chicken base.  Simmer about two hours until meat will fall off chicken.

Second remove soup sock, and set in a bowl to cool.  Take out lemons, onions, carrot tops, celery bottom and discard.  Cut celery and carrots into bite sized peaces and add to pot.  Add dehydrated onions, I use about as many as fill a cap on a standard mason jar two times, because that is how I store them.  If the jar is wide mouth I use one cap full.   This is the time to add the Keith Snow seasoning or blend of Thyme, Oregano, Basis and Rosemary.  Also now add your reserved garlic and all the parsley leaves, coarsely chopped.   Bring back to a simmer.

Third remove bird from soup sock, pick all meat off bird and add back to pot.  Simmer until celery and carrots are tender, soup is done.  You can add more salt and pepper to taste.

If you want to do noodle soup, I highly recommend you cook your noodles in salt water in a separate pot.  Then add them to your bowl and ladle soup over them.

For paleo noodle soup (and I think it tastes better) make up some zucchini noodles, just do the salt treatment and don’t even cook them, just ladle hot soup on them in the bowl.  To learn how to make zucchini noodles see this post.

Final note I don’t really use a recipe, this is all easier than it sounds and every time I make it it is a little different do not sweat it and omit or add as you see fit.  The method is the key, not the ingredients list.