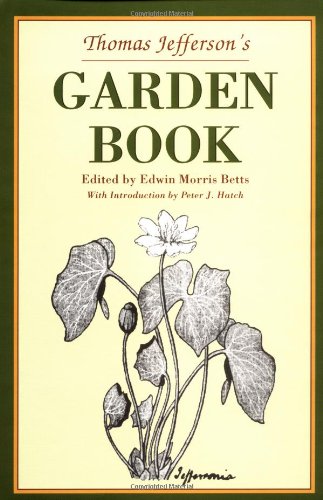 Today’s TSP Item of the day Thomas Jefferson’s Garden Book.  When I first heard that this book existed I had to have a copy, I ordered it without even reading any reviews of it, or worrying what exactly was in it.  That says something given the price of this book is about 50 dollars.

The reason is simple, Jefferson is one of my biggest heroes.  He was not a perfect man, we know his faults but we know his genius as well.  He sat with other founders like Ben Franklin and penned our Declaration of Independence, he served in our the Continental Congress and was our second president.

We know him as an author, a leader, a politician and a diplomat, he was all those thing but in his heart what he most wanted to do was to cultivate the soil.  In his own words he said as much when he said this….

I have often thought if heaven had given me my choice of my position and calling, it should have been on a rich spot of earth, well watered and near a good market for the productions of a garden.

No occupation is as delightful to me as the culture of the earth, and no culture comparable to that of a garden.  Such a variety of subjects, someone always coming to perfection, the failure of one thing repaired by the success of another, and instead of one harvest a continued one though the year.

Under a total want of demand except for our family table, I am still devoted to the garden.  But though an old man, I am but a young gardener.

His Garden Book, more accurately this modern version with commentary and hundreds of letters from Jefferson to family, friends and business partners included is amazing.  It is a look into the world of early America.  It includes requests for seeds and plants both from Jefferson and from his friends back to himself.  You also get  some pretty amazing quotes on what this founder of our nation really thought such as this…

I know nothing so charming as our own country.  The learned say it is a new creation; and I believe them; not for their reasons, but because it is made on and improved plan.

Europe is a first idea, a crude production, before the maker knew his trade, or had made up his mind as to what he wanted.

This book is full of such wisdom and poetry and also simple letters, notations, planting schedules, landscape designs, sketches and more.  Fans of permaculture will see a lot of new ideas are really simply discovering old ones such as Jefferson’s work to introduce contour plowing to our nation, a practice which then spread rapidly.  You also see how much he valued plant diversity and utility for instance here is another quote…

The greatest service to any country is to add a useful plant to its culture.

Oh by the way, all of the above quotes are just in the introduction of this book!

Reading it is like a 700 page treasure hunt where you find something akin to gold on ever other page.  A plant variety to research, made much easier by the editors notes and use of Latin names for many of them.  You also realize something about Jefferson, the man like peas!  I am talking every years entry starts out with something like, “Sowed a bed of peas, first soaked to better germinate“.  He was also fond of lettuce feeling if every family would simply sow a single thimble full of lettuce seed every Monday from February to September our nation would always be well fed.

This book is fantastic, if you love gardening you will love it, if you love history you will love it, if you love the concept of liberty you will love it.  Now if you love all three, then like me you won’t just love this book you will consider it a heirloom in your library.  My copy is full of underlines and side notes.  Some day when my grandchildren read it, they won’t see a perfectly preserved antique, I hope it will as tattered with my own thoughts and interests, frayed and yellowed a bit.  And my hope will be that they too will see that indeed these ideas are timeless that liberty and freedom can exist only when men and women care enough to feed both their stomachs and souls though the tending of plants.

A few times a week I open this book and read a few pages, it is like walking with Jefferson, in Monticello and learning something new everyday.  Some days I read from my last bookmarked spot, others I just randomly open it to a page and it is always awesome.  So consider adding a copy of Thomas Jefferson’s Garden Book.  It will also make a treasured gift for anyone who loves history, freedom or gardening.