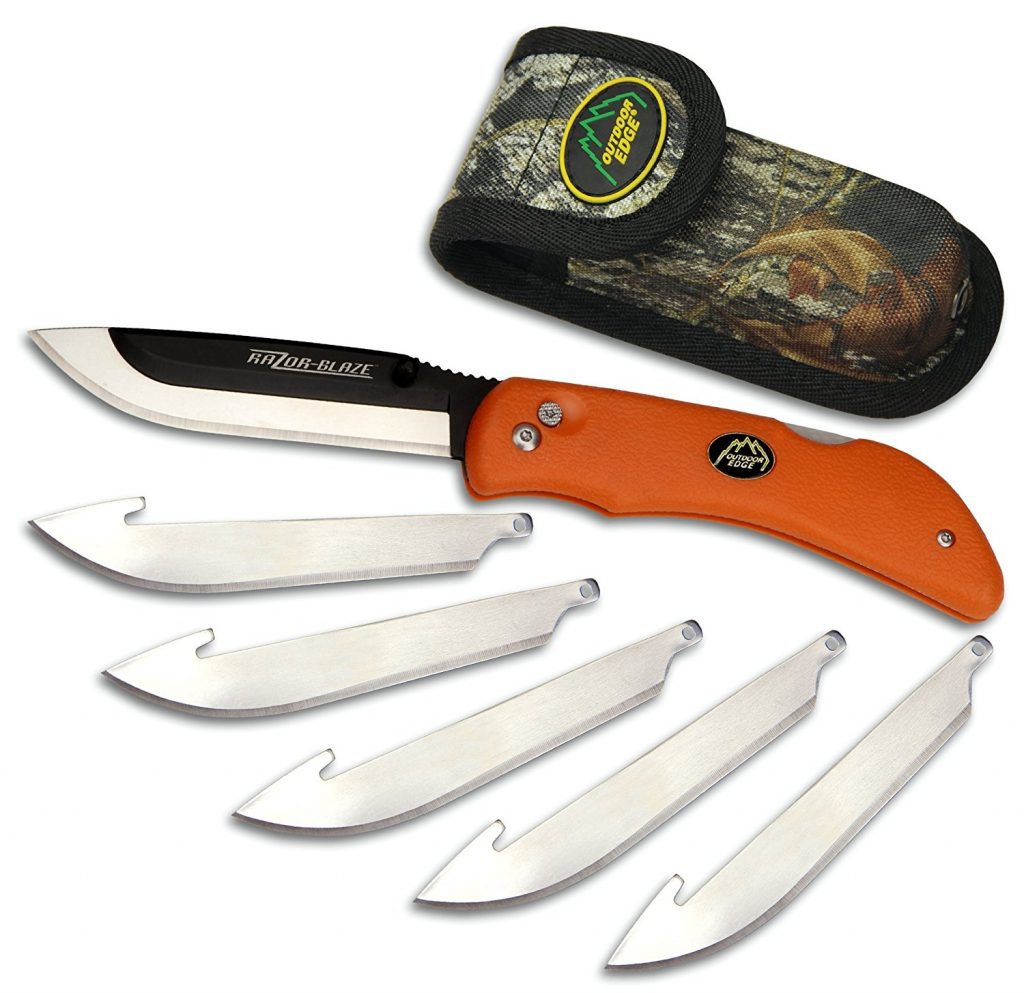 Today’s TSP Amazon Item of the day is the Outdoor Edge RB-20 Razor Blaze Knife.  Man this thing is slick!  I picked on up right before last years deer hunt and  I’m glad I did.  I was hunting with about 14 other people at a ranch in the Texas Hill Country and was surprised to see about half the people there with one version of other of this knife.

The premise is simple your blade is always razor sharp because when it gets dull, you toss it out and replace it with a new one, new blades cost about $1.60 each.  The blades are made with an inexpensive steel called 420 J2, which has poor edge retention but sharpens very easily and is extremely resistant to corrosion and rust.   This steel until these knives came out had two primary uses.

Given the above I think 420 J2 is perfect for what Outdoor Edge is doing with this knife.  Let me tell you what everyone with one at this hunt had it primarily for, one thing, skinning.  I am big on not letting a knife get dull in the first place, using a good sharpening steel you can keep an edge for a very long time, if you are patient and keep touching it up.

However in the real world hunting makes a man tired, stuff slips and next thing you know it is 9PM, you haven’t had dinner yet, you have a half skinned deer or hog and dull ass knife.  In a word this SUCKS!  If someone said, here is a razor sharp blade for a buck 60 you can have right now, you’d hand him a 5 and tell him to keep the change!

While I didn’t charge the guy this did happen at this last hunt.  I met a really cool guy who had brought his God Son on a hunt with him.  The boy shot a beautiful Aoudad, really beautiful.  The man was really taking his time skinning this animal because it was going to be mounted.  I could tell that it was really important to him to do a good job.  I could also tell his knife was getting dull but noticed a Outdoor Edge Knife sitting on the ledge next to him.

When I asked him about it he said they were great but he forgot to get extra blades.  I asked if he wanted a blade for it and thought he was gonna stop and hug me he was so happy.  He finished up and we talked while he did.  Turns out this guy is the type that hunts all over the world, hunting is pretty much all he does.  He is retired very young, mid thirties.  He invented a stem cell technology that he sold to Cancer Treatment Centers of America and well, he is set for life.

He had just come back from Tajikistan from a sheep hunt that is considered one of the most challenging hunts in the world.  He has hunted in New Zealand, Australia, Russia, etc.  And yea for skinning he carries a 35 dollar knife with a disposable blade!  Why?  It works and it always works.

Just unlike him pick up a pack or two of extra blades!  They are only 9.99 with free shipping on prime.

Let me be clear, you can absolutely use this knife for anything you’d use any similar knife for.  It simply though screams out, use me for skinning, and that is why I have one.  Skinning is hard on an edge and you simply need a razor sharp knife to do it right.  With this you always have one.  Again I know how to sharpen knives and do a good job of it, but at 9:30 PM on a hunt, I want to be kicking back at the fire with a beer and belly full of deer heart off the gill, not sharpening a knife and looking at a half skinned animal.

So check out the Outdoor Edge RB-20 Razor Blaze Knife all the other hunters in camp that had them, loved them, and I think you will too.  I find the knife a great deal with 6 blades included for only $34.95.

Remember you can always find the TSP Amazon Item of the day by just going to TspAz.com and by shopping at TspAz.com anytime you shop online you help support TSP and the work we do here no matter what you buy.

P.S. – The other knife I considered for this use was a Havalon Piranta but I felt the blade shape just wasn’t enough like a “regular knife”.  The blades cost less for sure in fact about half the price but again they are not optimal in my personal view.

The thing he liked better about the Piranta is it is easier to clean.  I can seen in the design why this is so.  However when I got home, I just removed the blade from my knife, tossed the frame into the silverware thing on the dishwasher and it came out clean as new!  I personally prefer the Outdoor Edge but wanted to bring the Piranta to your attention because the long term cost is lower.  However how many big game animals do you skin in a year?