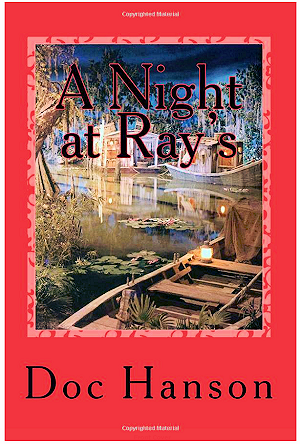 Today’s TSP Amazon Item of the day is the book, “A Night at Ray’s” – by Doc Hanson.  So who is Doc Hanson?  Well, there are two ways to answer that question, here is the first way I answer it.  Doc Hanson is actually Dennis my neighbor to the rear of my property, and one of the coolest guys I know.

Doc is a name earned though a life in medical care but it began in the 60 when he volunteered to join the US Navy during the Vietnam War and became a corpsman and served two consecutive tours of duty as a corpsman with Marine Recon in country.

This later led to an amazing career.   Retiring after forty years’ experience in health care Doc Hanson held both administrative and clinical positions. As a Registered Nurse, Registered Respiratory Therapist and a Certified Critical Care Nurse he held responsibilities in acute care hospitals as a Clinical Department Head, Director of Nurses, Assistant Administrator of Clinical Operations and as Hospital Administrator and CEO. He was Senior Partner in a medical consulting firm and has owned, directed and operated several Home Health and Hospice agencies.

While holding the position of Associate Professor at Texas Wesleyan University, he was Author and Contributing Author of two medical text books published by Prentice-Hall. He published his first adventure novel, Captain Bloody Bill Walker and the Letter of Marque in 2013 and is working on the sequel, Pirates Odyssey.

Growing up along the Gulf Coast Doc has spent a lifetime sailing the Islands of the Caribbean and the Gulf of Mexico. His firsthand knowledge brings a dazzling style of descriptive details that embellish his stories with colorful realism.

He lives on a small ranch in North Texas where he pursues his passion for history, ships and writing.  In other words Dennis is a hell of a guy to have as a neighbor.

His latest book is really cool as well!  “Ray’s” is a bar where tales from a retired USN Masterchief take you on a some what conspiratorial journey to examine questions like…

In the summary Doc puts it this way,

“There’s history, and then there is ‘History’. A Night at Ray’s is the latter. “

Personally I get the feeling there is a bit more truth in this “work of fiction” than many would feel comfortable with.  Anyway this is a book with the major two qualities I like, easy to read but hard to put down.  So check out A Night at Ray’s by Doc Hanson today, I think you will find it as fun and exciting to read as I did.