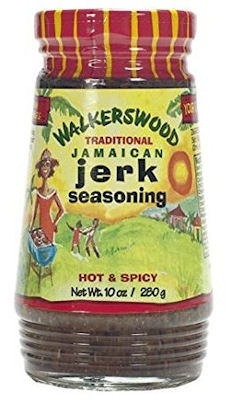 Today’s item of the day is Walkerswood Traditional Jamaican Jerk Seasoning, I prefer the Hot and Spicy but you can also get it in Mild or in a Pack with One Each.  I like heat, but I don’t like mental crazy heat and to me anyway, the hot and spicy is fairly mild.

This is another one of my “cooking cheat codes” building on Friday’s review of Doenjang Paste.  I have always loved Jamaican food, especially the star of the show, jerk chicken.  So long ago I taught myself to make it from scratch.  When I met my former business partner and fellow foodie Neil Franklin, he told me about this stuff, and said, “just try it mate, you’ll never do it from scratch again“.

Neil was spot on, and a look at the ingredients shows you why, no junk and the core of solid jerk seasoning, scallions, scotch bonnet peppers, salt, black pepper, all spice, nutmeg, citric acid, cane sugar, thyme leaves.

Not far off what I used to make from scratch.  And a hell of a lot easier and faster!

It is so easy to use, rub it all over chicken, put chicken in a zip top bag and let it sit over night in the fridge.  You can then bake at 350 till done, kick the broiler on and crisp the skin.  Oh and save that juice, add that to a bit of rice and it is hard to not eat until you think you are going to explode.

My favorite way to use it though is grilled, low and slow over indirect heat.  If you want the juice put a drip pan under it, then give the drippings a quick simmer over direct heat to be safe.  And guess what I just found out, you can buy pimiento wood chips.  In Jamaica real jerk chicken is cooked over pimento wood.  So just make up a foil pouch of chips and poke some holes in it and bring that final bit of flavor to the party.

So that is main reason why this stuff exists, making jerk chicken and if that was all it did, it would be enough.  Remember though, this is a Spirko cheat code, so you know I have more to add.  Rub large shrimp with it, dust them with a bit of lime zest, bacon wrap and grill on skewers.  The shrimp, the bacon grease, the lime, the jerk, yes it is all very, very good.  Make a sauce from rum with pineapple for these and you may think you died and went food heaven.

Spirko Hack – When bacon wrapping shrimp it is hard to get bacon crisp without over cooking the shrimp.  Step one, par cook the bacon, to where it renders about 1/3rd of the fat but will still wrap easily.  Step two, put a cast iron skillet on the grill or a side burner, put each skewer on the cast iron for 15-20 seconds per side at finish.

How about jerked baby back ribs, really easy ones that are almost no work!  Rub your ribs well and marinate over night.  Sacrifice a beer into your pressure cooker, put in steaming rack, then add ribs, pressure cook for 40-50 minutes.  Take out ribs and make a base from the stuff in the bottom of the cooker 50-50 with your favorite BBQ sauce.  To do this simmer it to reduce by half and blend in about the same amount of BBQ sauce, after the reduction.  Baste top of ribs and finish on grill or under broiler.  Save some of the baste for dipping.  Just cook long enough to dry out the baste and firm up the ribs, about 10-15 minutes.

Jamaican meat balls, there is no such thing.  Oh but there can be!  Finely chop one 12-16 ounce pack of bacon (oh you thought I was just going to mix this and hamburger didn’t you?), now add one pound of ground beef and one pound of pork and the bacon to a bowl.  Chop up a bunch of green onions and a few cloves of garlic.  Use about 1-2 tablespoons of Walkerswood seasoning, I do this by eye.  Add one egg and half a cup of panko bread crumbs to bind.

Mix well and this is important, let it sit for an hour at least, over night is better.  Bake in a 400-425 degree oven until done.  I like to bake them on a rack so the drippings fall away and they crisp a bit with the convection roast setting, save those drippings though, use foil for easy cleaning.  Why does it have to sit before cooking, those wonderful panko crumbs suck up all that seasoning and hold onto it, that is why.

Frankly you can jerk up just about any meat and even some veggies with this stuff, so give Walkerswood Hot and Spicy, Mild or Variety Pack a try today.  It doesn’t just make great chicken, it makes great everything.

One last hack you say?  Okay, next time you are hungry for burgers, mix some into your meat.  Also coat one side of some bacon with it, grill your burgers and bacon, also slice an apple into about 1/4 inch slices, (trust me), grill the apple till just done and grill some chili peppers, seeded jalapeno is good.  Now assemble the burger with peppers and apple where say lettuce and tomato would normally go.  Of course cheese is optional but highly encouraged on this, pepper jack is my preference.  Toast your bun of course with a brushing of garlic butter.  So now you are hungry right?  So you know what to do, get some Walkerswood Today.

Remember you can always find all of our reviews at TspAz.com and by shopping at TspAz.com