Special Note –  These are a top ten useful item on my homestead and today the 8-inch & 12 inch versions are on sale in the 6 dollar range.  At this price they are cheaper than the shitty ones that are not re-useable. If you don’t have some of these, bluntly you are wrong. Get em while they are cheap.

I can’t directly link to the 12 inch option, because Amazon is being stupid about it, you can just change the option from the main page for them if you want those. 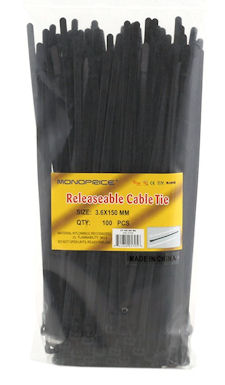 Since I first started recommending these they have added a lot of different sizes.  They now have them in 6, 8, 10 and 12 inch lengths.  So the choice is yours.  But the 8 inchers and 12 inchers are on sale today; keep in mind they are reusable and releasable and two 8s make one 16 easy enough.