I find it interesting at times that people can both use the same words to make entirely different points.  I am really enjoying my time at PermacultureVoices and the people here are mostly entrepreneurial minded doers.   Yet as always when many gather in the name of Permaculture at least a few will gather that seek solutions from government rather than from ourselves.

I listened to one presenter bash the Food Safety and Modernization Act for the mess that it is.  He did a good job in pointing out how bad it was.  Then turned around and talked about what was good in it, he called them crumbs but said at least we got that.

He then said government needed to do more for us and that Obama was waiting on the people to give him direction.  To me it is difficult to understand how someone can both understand how bad government really is and yet still turn to government for a solution.    The reality is both those that want a free society and those who seek a socialist solution can often find a totally different meaning in the same words. 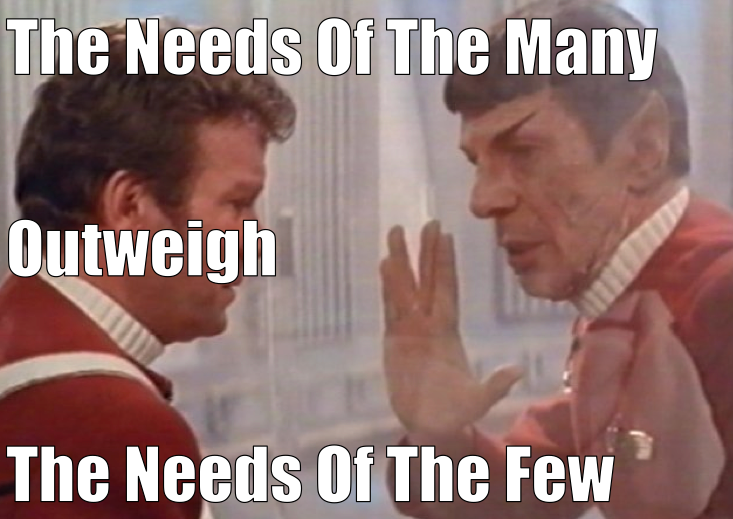 I have heard those who seek government solutions use this quote to defend government.  I have also heard many who love liberty say that this quote is socialist.  I say both are wrong if taken in the context of the movie.  In this movie Spock who has power (second in command on the ship) could have ordered someone to save the ship (applied force).  Instead he sacrificed himself for the good of the many by choice and with free will.

1.  In a free and ethics based society this fact inspires the few or the one at times to sacrifice willingly for the benefit of the many.

2.  In a society that is controlled by government this fact is used as an excuse for those in power to use force to victimize the few or the one for the benefit of the many.

I ask you simply, which society would you prefer to live in?  Which of the two would you wish to leave behind as you take responsibility for the future existence of your children and their children?